A little over a year ago, I woke up in the middle of the night and could not breathe. I had a heavy feeling in my chest. I began praying by repeating to myself a directive Mary Baker Eddy gives in the Christian Science textbook, Science and Health: “Christian Scientists, be a law to yourselves that mental malpractice cannot harm you either when asleep or when awake” (p. 442). This had a calming effect on me so that I could begin to think clearly. It came to me to sit up and try to get out of bed. There was some relief, and I could catch a breath or two.

Several other uplifting passages from Science and Health came to thought, including “the scientific statement of being” on page 468, which begins, “There is no life, truth, intelligence, nor substance in matter.” I got out of bed and continued to repeat it; gradually I could get some breath. I also worked with the idea that “Christian Science brings to the body the sunlight of Truth, which invigorates and purifies” (p. 162). 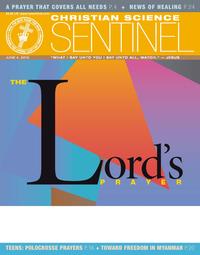