Trust in God’s law of health

A calm, Christian state of mind is a better preventive of contagion than a drug, or than any other possible sanative method; and the “perfect Love” that “casteth out fear” is a sure defense.

The phone rang one afternoon. I answered to hear a young mom saying that she had just returned from picking up her daughter from preschool. Signs had been placed all over the building warning parents that there was a case of measles at the school, and each parent should be alert to the danger of this contagious disease.

Even though the affected child had been in a different area of the school, this mom was asking if we could pray together for the safety and well-being of her daughter, her daughter’s classmates, and others attending the school. It was easy to appreciate the love motivating her desire to pray. And it was reassuring to know that the source of that love and compassion had to be God, good, because each of us is the image and likeness of our Maker. Since the desire to see health and well-being for all was coming from God, it was natural to expect that God would bring that desire to fruition.

Insights from my family’s healings came flooding into thought as I spoke with that young mother. I could speak with conviction that there was no need to fear for her daughter’s or the other students’ health. We could put our trust in God’s law of health and wholeness as the only health law that could govern the children. When the mom took her daughter to school the next morning, she was delighted to find classes resuming as usual. (Her daughter and her daughter’s classmates were all fine.) The measles outbreak signs were removed that same afternoon.

In life, there do appear to be laws of contagion based on an understanding of existence as based in matter. Whether the contagion is a seasonal illness, a childhood disease, or any of the other myriad contagions that people face, the basis of its power is the belief that God either causes it, allows it, or is powerless to stop it. We become fearful of circumstances that we associate with catching a disease and alter our normal behavior to mitigate those fears.

Yet what Mary Baker Eddy, who founded Christian Science, discovered in her deep study of the Bible was that a knowledge of God as Spirit, and an obedience to the First Commandment to have no other gods before Him, necessarily precludes the existence of any other lawgiver and denies any basis for the so-called laws of matter.

In her textbook, Science and Health with Key to the Scriptures, she asks, as any good teacher would, many compelling questions designed to get students of Christian Science to think deeply about the nature of God as All-in-all, as omnipotent, omnipresent, omniscient good. On page 394 we find this series of questions: “Will you bid a man let evils overcome him, assuring him that all misfortunes are from God, against whom mortals should not contend? Will you tell the sick that their condition is hopeless, unless it can be aided by a drug or climate? Are material means the only refuge from fatal chances? Is there no divine permission to conquer discord of every kind with harmony, with Truth and Love?” Coming from the author’s premise of the nature of God as All-in-all and wholly good, the questions are necessarily rhetorical in nature. It’s natural for our hearts to cry out the answer—a resounding no!

What a liberating concept, that we have divine permission to conquer contagion with Truth and Love, synonyms for God. Our prayers then move beyond the idea that we need to beg God to take the sickness away or stop it from going around, to an acknowledgment that God, Truth, Love, is indeed the only lawgiver and never created laws of contagion.

Those so-called laws are imposters, suggesting that God’s cherished children (again, that’s us!) must surrender our God-given dominion over evil and accept the necessity of sickness. We surrender our sense of dominion when we believe that these laws have some enforcing power other than God, and then bow down to them in fear of their reality.

It’s easy to react with fear when we hear of some contagious disease going around. It can be a little harder, but well worth the effort, to take a stand in opposition to the idea that contagion is a law. Contagion begins in thought that accepts illness as inevitable. Reasoning from a spiritual basis, we refute that claim for ourselves and for others, knowing that God’s children cannot be made to believe a lie. Refusing to bow down to false law is an action that brings blessings.

Christ Jesus is our model for action in this regard. Several times the Bible records that Jesus healed leprosy, and while the term included a variety of skin ailments, at least some of them would have been regarded as highly contagious. Yet Jesus not only didn’t show fear, he showed a calm trust that God’s will was for health for all.

Jesus reached out and touched lepers. This was not with any sense of pride—as in, “Look what I can do, and I’m not affected!”—but rather with the deepest compassion and humility, showing the lepers, and those watching, the cleansing power of the Christ, removing the effects of false law and honoring our Father-Mother God as the only lawgiver. These healings showed clearly that contagion was not a law and that we indeed have “divine permission to conquer discord of every kind.”

When we’ve been exposed to a contagious disease, we have divine Love to turn to. In his exposition on the nature of God, St. Paul wrote: “For in him we live, and move, and have our being” (Acts 17:28). Where can we go, what can we be exposed to, that could possibly be harmful in the presence of divine Love? And we truly can never be outside of that presence. In Science and Health we find this inspiring counsel: “We should relieve our minds from the depressing thought that we have transgressed a material law and must of necessity pay the penalty. Let us reassure ourselves with the law of Love. God never punishes man for doing right, for honest labor, or for deeds of kindness, though they expose him to fatigue, cold, heat,
contagion” (p. 384).

Whether the contagion is a seasonal illness, a childhood disease,
or any of the other myriad contagions that people face, the basis of its power is the belief that God either causes it, allows it, or is powerless to stop it.

Those lines came to my rescue several times when there were outbreaks of measles, colds, and flu in my children’s schools. On occasions when school officials deemed it appropriate for school to continue, our family reasoned together that attending school was a purposeful activity and that all children could be in their right place, without fear of the “penalty” of sickness. Thinking about the law of Love sheltering them all, we prayed to understand that they were “hid with Christ in God” (Col. 3:3), known and visible to Truth and health, “invisible” to false laws of sickness and contagion.

It may also be well at times to remember the second great commandment in the Bible—to love our neighbor as ourselves—when facing a challenge with contagion. If we have symptoms that may alarm classmates and co-workers, it would be a kindness to stay out of public spaces until we have gained the victory.

It is also needful to know that immunity to contagion is something that we can and should actively acknowledge for ourselves and for the world. Often, when we hear friends talk about contagion, or TV and radio commercials and news stories reporting on the subject, as well as material remedies suggested, we’re tempted to merely press the “mute” button or simply avoid being drawn into a dialogue. But have we considered those as times to actively pray that we and others cannot be made to be fearful or expectant that disease is inevitable? And if we’re led to share something in the midst of such messages, God will guide us.

When we realize the genuine power of an all-good God, who makes and maintains the universe as the expression of His own nature, it becomes natural to question and then refute the legitimacy of claims that contagion is a law. “Matter succeeds for a period only by falsely parading in the vestments of law” (Science and Health, p. 372). God is divine Principle, Love, and His laws are laws of harmony and health. Understanding this, even a little, can put a stop to contagious disease, revealing the healthy men, women, and children of God’s creating, and blessing the world.

Sarah Hyatt is a Christian Science practitioner and teacher. She lives in Charleston, South Carolina. 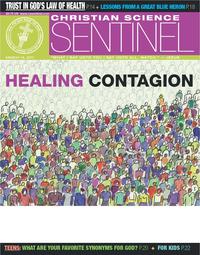