THIS summer, some kids at day camp, on the island of Martha's Vineyard in Massachusetts, wrote a song about how to be kind to one another and to the environment. Later in the summer, one group of campers had an opportunity to put the words of the song into action. Here's what happened.

"There is a man who lives next door to the camp, who is a little grumpy sometimes," the camp director said. "He thought we were too noisy, even when we were trying to be as quiet as we could. One time, the kids tried to make friends with him, but he didn't seem interested.

Send a comment to the editors
NEXT IN THIS ISSUE
What would YOU do?
what would you do? 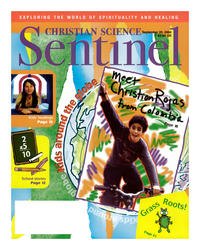