Seeking calmness and serenity is a reassuring way to hear angels speak to us. That proved true for me when a friend and I were under siege in my house during the 1997 political crisis in my country, Republic of the Congo.

When this situation first began, my friend Éton and I found places for our wives in a region of the country that seemed safer. Two days later, our neighborhood in the capital, Brazzaville, was invaded by the warring factions. We, along with some brave neighbors, had agreed as a rule to check on each other as soon as we got up in the morning, because the night's confrontation had been severe.

Philippe and his wife, Flore, have two children. 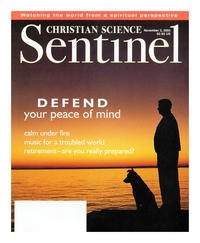