My first flight into space

"Five, Four, Three, Two, One, Liftoff, Liftoff of STS-8, on The First Night Launch Of The Space Shuttle. " With these words from Mission Control, I began my first adventure into space.

It was dark at 2:30 a.m. But as the solid rocket boosters ignited and the Space Shuttle Challenger lifted off, the night sky seemed to turn into day. The two rocket boosters plus three shuttle rocket engines thrust us upward. Inside the shuttle, we were hanging upside down, being bounced around in what felt like a fast and noisy elevator. No wonder it sounded so loud and felt so fast. In just two minutes, we were traveling three times the speed of sound and were already 22 miles above the ground! It takes a passenger airplane over ten minutes just to reach five miles above ground.

Send a comment to the editors
NEXT IN THIS ISSUE
WHAT WOULD YOU DO?
What would YOU do? 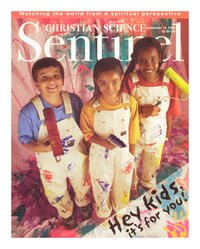