There's plenty of good to go around.

"Here's a remedy for jealousy," my friend told her daughter, a freshman in a highly competitive collegiate program. At that, I pricked up my ears. I've frequently encountered professional rivalries in my own life, and a way to eliminate all that discord sounded very appealing. The discussion centered around a passage from Science and Health with Key to the Scriptures where Mary Baker Eddy comments on the Biblical account of a family tragedy. She writes, "Jealous of his brother's gift, Cain seeks Abel's life, instead of making his own gift a higher tribute to the Most High" (p. 541). My friend's point was that, whenever jealous feelings surface, the best response is always to offer a "higher tribute" to God.

A tribute is a specific type of gift that acknowledges dependence upon another and is characterized by qualities of respect, gratitude, or affection. My study of the Bible has convinced me that, whether one realizes it or not, every individual depends upon God, the only creator, for life itself. Offering a higher tribute to God is not a function of human talent, nor is such a tribute measured in terms of worldly accolades. Rather, the highest tribute flows from the deepest humility, from acknowledging God as the source of all good and giving God all the glory. 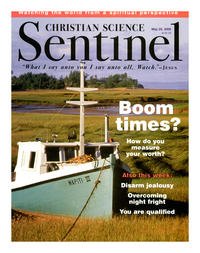