Are you a good lawyer for yourself?

No, I am not about to recommend that we all go to law school and become attorneys. But what would you think of a lawyer, defending a client who he knows is innocent, who then deserts his defense when the opposing counsel's evidence seems to prove the client is guilty? Would you hire such a lawyer? I don't think so.

Have you ever thought of yourself as a lawyer on your own behalf, defending your own true, innocent selfhood, made in God's image, from evidence that tells you otherwise? Well, you are a lawyer, in a sense, in your own thinking. Limitations, injustices, ill health, fear, lack, are a few of the false accusations that humanity suffers from. But you can defend yourself from these accusations. Christian Science releases the sufferer by setting the record straight. 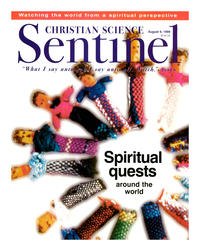