The millennium: a time for daring

Are you ready for the good to come—and for all the good that's here now?

A THOUSAND YEARS AGO most educated Europeans knew the earth was round, not flat; yet, except for the Norse, they seldom ventured far into the open ocean. Although the Chinese had ships that were big enough to sail around the world, they didn't. Aristarchus in the third century B.C. and Copernicus in the sixteenth century A.D. calculated that the sun, not the earth, was the center of our solar system, but it was decades after Copernicus published his theory before the sun's centrality was widely accepted.

Today, inquiring minds are everywhere, and new discoveries are broadening our horizons every day. National Geographic magazine, in an introductory article to its series "Making Sense of the Millennium," speaks of a new era of exploration, seeking to understand life's place in the universe. The Geographic notes that dense colonies of bacteria thrive in the hot springs at Yellowstone Park, in water temperatures of 199 degrees Fahrenheit—well above the known temperature limit for bacteria. The magazine says, "In the new era of ex ploration we will continue to challenge accepted truths, which will lead to discoveries we can't even imagine. Maybe someday we'll even find a form of life that doesn't need carbon, nitrogen, and water—something science now says is not possible" (National Geographic, January 1998, p. 4).

(Robert A. Johnson is a contributing editor.) 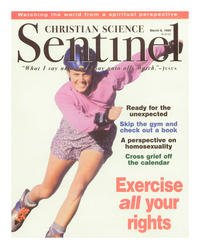