Prayer frees child from predicted problems due to premature birth

My mother was a drug and alcohol abuser. As a result, I was born ten weeks premature, I was a very sick child, and I was not expected to live. I spent three months in an incubator.

Since my mother was not in a position to take care of me, when I was two and a half, she agreed to let my grandmother raise me. My grandmother was new to Christian Science at the time, but knew the power of prayer. She had been healed of depression, which she had suffered from for many years. My grandma believed in her heart that the same prayer could heal me also. She prayed to know that I was the perfect child of God. Nothing my mother had done while she had been pregnant could harm me, because God was my true Mother and Father. 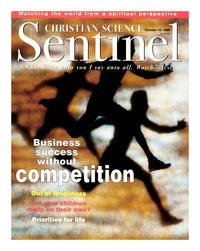