It would appear that negative concepts hang on in people's thoughts, and it takes at least ten opposite, positive comments to begin erasing one negative one. The media need to help with this. They should be proactive in publishing and broadcasting the good—especially when such "good news" would correct old, outgrown, negative beliefs.

A remarkable example of the need for positive portrayals in the media is found in the recent shooting by a fifteen-year-old of fellow students in a school cafeteria. In the flurry of news bites that followed this tragedy, I heard only a brief mention on public radio that a group of male peers had physically apprehended this young man while he was armed—thereby protecting fellow students, at the risk of their own safety. 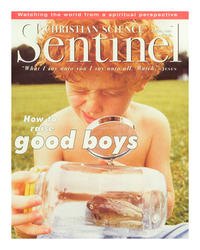