As I began my teaching year in 1993, a new boy enrolled in my kindergarten class who had severe behavior problems. In fact, his mother introduced him to me as one who would not obey directions and who was "just like his older brother" who had had several brushes with the police. During the first weeks I was able to contain his behavior, but he still didn't understand that he could choose to act lovingly and obediently.

On the day of our parents' night I was called to the principal's office after school. The principal told me she had just had a call from this child's mother, who had expressed concern that I might have physically abused her son. The boy had come home from school with a large red burn mark on his chest. When asked about it, he said that his teacher had caused it. The principal had suggested that the parents and child show her the mark that evening. Meanwhile she asked me to tell her whatever I could remember of the day's events that might explain the child's comment. I was at a loss. I could not think of anything that had happened that could have caused a mark. 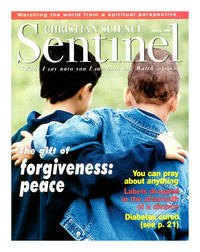