We are happy to reprint this article about Joyce Milgaard that appeared in a December issue of Maclean's, one of Canada's leading weekly news-magazines. Milgaard's powerful stand for justice served her family and community well and won her national recognition as an outstanding cititzen. One of a dozen Canadians chosen for the magazine's 1997 Honor Roll, Milgaard persevered for nearly 23 years in her efforts to free her son, who was wrongfully imprisoned for murder.

Inside the airy, lemony-white First Church of Christ, Scientist, in Bronxville, N.Y., Joyce Millgaard is among a band of 20 worshippers. Milgaard drives to the 50-year-old church every Sunday from her apartment in nearby Riverside, just north of Manhattan, where for the past year she has been administrator and nursing director of High Ridge House, a Christian Science Hospital. In the middle of singing Hymn No. 278, Milgaard leans towards her neighbor. "I really worked on this next verse," she whispers, "to help me deal with David's situation." Then she continues in a sweet, girlish soprano: 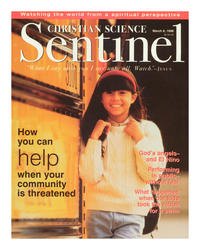