During my adult years, I worked as a registered nurse in various capacities, including twenty-two years as an emergency room nurse. God's healing work was constantly evident to me, but an inward struggle began when I realized that I was supporting faith in medicine rather than in God as the healer. During these years I wrote my master's thesis on "Energy Based Healing Techniques" such as therapeutic touch and was able to document many healings. But I felt uneasy when I was credited as the source of these healings instead of God. When I began seeking alternative healing techniques for myself because of a muscle-joint disorder, I was urged to "stay with the pain" as I worked through my emotional issues.

I had always believed in God, though I sometimes doubted my faith in Him. But when I became acquainted with Christian Science, my journey of understanding God began. When I started reading and studying Science and Health, I felt that I had finally come home. Looking back, I realize that the inner struggle to believe in mortality versus immortality was becoming more intense as I continued to read Science and Health. 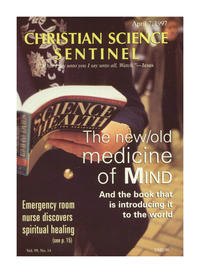