An African-American teenager had been murdered—lynched at the instigation of a white supremacist hate group. See Jesse Kornbluth, "The Woman Who Beat the Klan," The Ku Klux Klan: A History of Racism and Violence, 4th ed. (Montgomery, AL: Southern Poverty Law Center, 1991) . The two men responsible were convicted of murder and imprisoned for their crime. But then the Southern Poverty Law Center, a legal organization dedicated to bringing justice to the victims of racism and prejudice, brought a suit against the hate group itself, seeking a judgment in behalf of the mother of the murdered man.

Near the end of the trial, when the arguments for the prosecution and the defense had been completed, one of the defendants stood up and asked the judge if he could make a statement. He told the jury that everything he had done had been at the instigation of the members of the hate group. He said, "I do hope you decide a judgment against me and everyone else involved." Then he turned to the mother of the young man he'd murdered and asked if this woman could find it in her heart to forgive him. She replied without hesitation, "I do forgive you. From the day I found out who you all was, I asked God to take care of y'all, and He has."

At this point, people were openly weeping. This woman, who'd lost her son to a vicious hate crime, was able to reach out to that young murderer and forgive him. The prosecuting attorney who described this incident in a video produced by the law center said, "It was a love that we hear so much about but know so little of." And he commented that "her words in that courtroom that day [represented] a higher justice" than the severe monetary judgment that was finally made against the defendants—a judgment that effectively crippled the activities of that hate group.

Did such a transcendent love simply express the magnanimity of a remarkable woman? And did the activities of the legal organization represent only an outstanding degree of human caring? Surely such instances evidence a higher love. They're the human evidence of the divine fact that God is Love—even if they're not always recognized as such.

The Bible abundantly describes a loving God, forgiving, caring, full of lovingkindness and tender mercies. And in the First Epistle of John it goes still further and proclaims God as love itself (see 4:16). This is no theological abstraction. It reveals the nature of the Love that is God—divine, universal, impartial, eternal, all-powerful, ever present. The operation of divine Love eliminates everything unlike love—fear, hatred, malice, prejudice, injustice. And since the man of God's creating—the true nature of you, me, everyone—is actually the likeness of God, His love must be expressed by each one of us.

It was something of man's true nature reflecting God as Love that appeared in that courtroom: in the caring of the legal organization seeking to correct a gross injustice; in the defendant's honest admission of guilt and his reaching out for forgiveness; and in the complete forgiveness the mother of the murdered man so readily expressed. In fact, every act of kindness and caring, every unselfish thought or deed, every time we repent or forgive, affords some evidence of the fact that God is Love.

This divine Love is expressed impartially and universally and yet meets individual needs. By way of illustration, one clear, sunny evening my wife and I prepared a picnic meal and drove to a quiet spot by a bay. As we sat on the shore looking over the gently lapping water, the reflected sunlight sparkled across the bay right to our feet. It was as if we had our very own path of light, our own special connection direct to the sun. And yet, someone sitting fifty feet to our right would also have had his own path of light. And another individual a hundred yards to our left would have had her own path of light. The sun simply did its job of shining and the water of reflecting. And yet for anyone on any part of that shoreline there would have been an individual path of light.

The sun has been used as a vivid metaphor defining the nature of God. In the Bible the Psalmist writes, "For the Lord God is a sun and shield: the Lord will give grace and glory: no good thing will he withhold from them that walk uprightly" (Ps. 84:11). What a beautiful expression of the nature of God as Love! And Mary Baker Eddy writes in Science and Health with Key to the Scriptures, "The sun, giving light and heat to the earth, is a figure of divine Life and Love, enlightening and sustaining the universe" (p.538).

She replied without hesitation, "I do forgive you."

Like sunlight penetrating into unexpected places, divine Love reaches into places where there may seem to be little evidence of love. Science and Health states: "Love, redolent with unselfishness, bathes all in beauty and light. ... The sunlight glints from the church-dome, glances into the prison-cell, glides into the sick-chamber, brightens the flower, beautifies the landscape, blesses the earth" (p. 516).

On a bright sunny day, if we stood outside with our eyes closed, we might correctly say, "I see only darkness." But that's not the sun's fault! To be aware of the full radiance of sunlight, all we need to do is open our eyes. Likewise, divine Love is always present, always shining, always operating to bless and to correct. If we don't recognize it or feel it because we're trapped in some dark valley of fear, doubt, disease, discouragement, or sin, it doesn't mean that Love isn't there. But it does mean that we need to open our eyes—open our thoughts and hearts to realize the presence of Love and the power of this presence. In the illumination of divine Love, God, no aspect of darkness can exist. Love, truly accepted into our consciousness, casts out fear and doubt, heals disease, replaces discouragement with expectancy, sin with regeneration.

God, divine Love, is here right now. Love is impartial, universal; it has no favorites. But that by no means makes it distant or detached from anyone. Like that path of sunlight across the bay, it comes directly to each individual at that one's point of need. Each can open his eyes and accept it. That acceptance gradually helps us realize that not only is Love expressed to us, but as us, each time we act lovingly, forgive a wrong, resist anger, value spirituality in ourselves or others. It's like being not just what the sun shines on, but the sunlight itself. And in that light there can be no darkness.

EPHESIANS
God, who is rich in mercy, for his great love wherewith he loved us, even when we were dead in sins, hath quickened us together with Christ, (by grace ye are saved;) and hath raised us up together; and made us sit together in heavenly places in Christ Jesus. 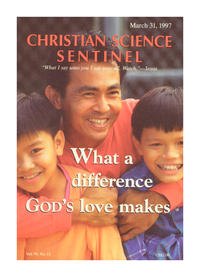