Over the Veterans Day holiday last November, American television viewers and newspaper readers were reintroduced to Phan Thi Kim Phuc. Although few people realized it, they had last seen her in a Pulitzer Prize-winning photograph taken by Nick Ut during the Vietnam War. She was the little girl running terrified toward the camera during a napalm bomb attack. Now, grown up and married, with a child of her own, she was seen laying a wreath at the Vietnam Memorial in Washington, D.C.

"Sometimes I thought I could not live," she told a hushed audience of war veterans and their families, "but God saved my life and gave me faith and hope. If I could talk face to face with the pilot who dropped the bomb, I would tell him we cannot change history, but we should try to do things for the present and for the future to promote peace."

Send a comment to the editors
NEXT IN THIS ISSUE
Editorial
Sexual harassment: an honest discussion 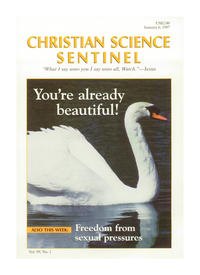