Virtue: needed for peace and purpose

Writing in the Rocky Mountain News Rocky Mountain News, November 26, 1995 . at the Thanksgiving season last year, commentators Cokie Roberts and Steven V. Roberts spoke of a society that "hungers for a serious conversation about virtue and values." They quoted Benjamin Franklin's November 1728 prayer of thanksgiving and observed that "the whole purpose of the American experiment was, according to Franklin and his friends, 'the attainment of virtue.'" They echoed the sentiments of so many voters today who are turning to their political leaders and asking, "how did this happen, how did virtue disappear from our culture, and why don't you people in power do something about it?"

Yet Cokie and Steven Roberts also went on to note positive signs of "much that is virtuous," especially in families. And it isn't difficult to conclude that the answer to the decline in values will not be found simply by turning to the "people in power." We're going to have to do something about it ourselves—all of us in our own lives, and in our own spheres of influence however small or large. After all, isn't a virtuous society really built by example? Isn't it the way we each conduct our own affairs, in family life, in the workplace, in our daily rounds, that says, "Here is virtue; here is something good and valuable; here is the way to live—at peace, in harmony, with purpose"? 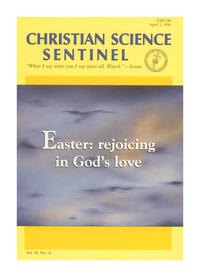