Suppose you're a counselor to a king who has had a dream but he can't recall it. He asks you first to relate the dream and then interpret it. The Bible describes the reaction of the counselors of the Babylonian king, Nebuchadnezzar, faced with just this situation. They exclaimed in horror, "There is not a man upon the earth that can shew the king's matter: therefore there is no king, lord, nor ruler, that asked such things at any magician, or astrologer, or Chaldean" (Dan. 2:10).

The king's counselors were right! No man "upon the earth," that is, no one looking to a personal, material sense of intelligence, could possibly achieve such a thing. There was, however, a man in that court who knew that he could prayerfully find an answer by turning to something other than a limited sense of intelligence. Daniel had a deep-seated trust in God's ability to reveal Himself as all-knowing. He confidently promised the king that he would tell him the interpretation, and that's exactly what happened. In his prayer of gratitude to God, Daniel said, "Blessed be the name of God for ever and ever: for wisdom and might are his" (Dan. 2:20).

Send a comment to the editors
NEXT IN THIS ISSUE
Article
"What hast thou in the house?" 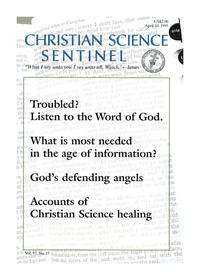