A Friend told me his dad had been healed instantaneously, through his own prayers, of the effects of an alarming accident. His father was an electrician who, while at work, had had one of his eyes accidentally punctured by a welding iron. Yet, before he had left work for home, his vision was perfect, and there was nothing but a red dot where the puncture had been. I asked how his father had accomplished this feat. My friend answered in an offhand manner, "Oh, he simply never put up with error."

Although I nodded knowingly, I didn't understand how one could "simply never put up with error." How had it even been possible for his dad to have remained calm enough to pray? 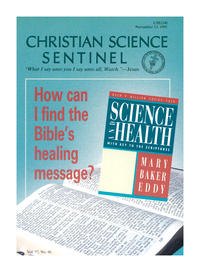