Our Comforter is here

The electrical storm was loud and long that evening. Lightning appeared everywhere, and thunder rumbled loudly after every flash. My small grandson began to look at me in fear. Then he picked up his favorite blanket and, climbing up on my lap, settled in as close as he could, with his blanket and me for reassurance.

My first thought was that he just wanted the comfort of a hug. But quite soon I realized he wanted more than human comfort. Responding to God's loving care is something that has always been natural to him. So I began to sing a hymn from the Christian Science Hymnal that begins: 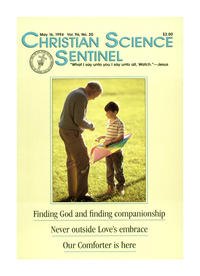