At peace with God

In the face of profound grief after his wife's passing, the British author and theologian C. S. Lewis found himself struggling desperately to comprehend the loss. Why had she suffered; why had she died; why and how could it have happened? Both his faith and his trust in God were sorely tested.

Lewis would write in his journal: "Not that I am (I think) in much danger of ceasing to believe in God. The real danger is of coming to believe such dreadful things about Him. The conclusion I dread is not, 'So there's no God after all,' but, 'So this is what God's really like. Deceive yourself no longer.'" A Grief Observed (New York: Bantam Books, 1976), p. 5 . Yet Lewis would not give himself up to the doubts and confusion without a fight. He was, after all, a Christian soldier. He fought the devils and, in time, reached the point where he was able to conclude his journal by reflecting on his wife's words of spiritual discovery. Humbled, his own longings could now match what she herself had come to feel—"I am at peace with God." Ibid., p. 89 .

Send a comment to the editors
NEXT IN THIS ISSUE
Editorial
What determines how we feel and what we express? 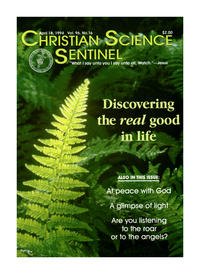