Contemporary English Version of the Bible

In 1984 the American Bible Society (ABS) initiated a translation for "Early Youth." Its efforts were so enthusiastically received by young people and adults alike, that in 1990 the Bible Society renamed the translation the Contemporary English Version (CEV). Guiding the work, which should be published by the middle of next year, is Barclay Newman, senior translations officer for the Bible Society. Before starting work on the CEV he was one of the translators of the Good News Bible Old Testament. Most of his experience with the ABS has been as a translations consultant in Southeast Asia, where he worked with the United Bible Society. Recently he discussed the CEV project with one of the Associate Editors of the Christian Science magazines, Mary Trammell.

Could you tell us what is different about the Contemporary English Version? How would you distinguish it from every other English translation? The main thing that differentiates this translation from any existing translation is that it is ear-oriented rather than eye-oriented. 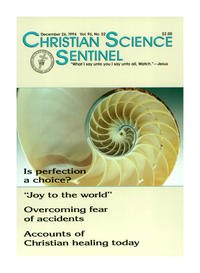