The news media and prayer

This week the Sentinel looks at media coverage of a renewed interest, in the United States, in the effectiveness of prayer.

It seems everyone's talking about it—Life magazine gave 2,400 words and eight striking photographs to it in March; The Boston Phoenix gave five pages to it in August; The Oprah Winfrey Show debated it "live" on network television for an hour in April. 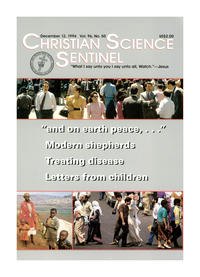