A note of gratitude

Sentinel readers who have followed court cases involving Christian Scientist parents over the last few years will know that the convictions of Christine and Bill Hermanson were overturned by the Florida Supreme Court. A message received from the Hermanson Defense Trust Fund announced that the fund is now closed. The Trustees of the fund asked that we share their words with all those who provided support. They wrote:

Thousands of personal letters and messages were received—tens of thousands of remittances. Words cannot express the depth and breadth of the love that poured in year after year. Neither can words express the great gratitude for this outpouring of love felt by the Hermansons and the Trustees. 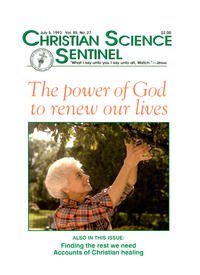