Christianity "let out of the box"

Many people pray—frequently and actively. In the United States, for example, the figures are startlingly large. According to a 1990 poll mentioned in The Christian Science Monitor, 75 percent of the adult public prays at least once a week, and 52 percent once a day, or more.

Obviously, a lot of people believe prayer helps them in some way. 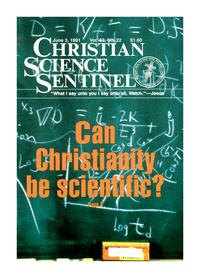