I have been a student of Christian Science for many years...

I have been healed of colds and of the effects of poison oak through the study of the Christian Science textbook, Science and Health by Mrs. Eddy. As a teenager, I was thrown from a horse while I was riding in rough terrain. My companion helped me to recover my mount and helped me back into the saddle. It appeared that my arm was broken. Upon arrival at home, we removed my sweater and found that a bone had pierced the skin near the elbow; it was evident there was a break. A practitioner was called and asked to assist through prayer, and over the next several days I prayed.

Send a comment to the editors
NEXT IN THIS ISSUE
Testimony of Healing
Ten years ago, when I was suffering from deep depression,... 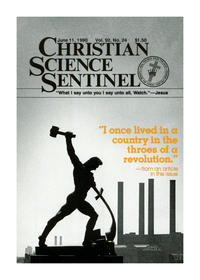