God has blessed me beyond measure

God has blessed me beyond measure. A medical verdict that my mother could have no more children turned my parents to the study of Christian Science. I was born some time later, and Christian Science became the basis of my rearing.

Both publicly and privately, my parents lived what they were learning of God. We attended church consistently on Sundays and Wednesdays. My father was healed early on of the use of tobacco and liquor. I was healed of earaches, whooping cough, measles, flu, and colds. In all instances, God was the only physician; divine Mind, the only medicine.

Send a comment to the editors
NEXT IN THIS ISSUE
Testimony of Healing
When I was a young teenager, I began to drink alcoholic beverages 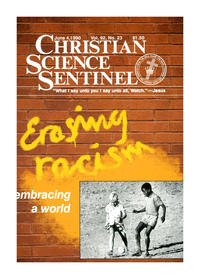