Stranger at the gate

There are all kinds of ideas and beliefs that we discover we shouldn't simply learn to live with. We see it as enlightenment when superstitions and false beliefs are outgrown. In recent decades, the belief that one race or culture is inherently superior to another has come under tremendous scrutiny. There's a growing sense of mutual value among people. This may be one of the most important accomplishments of the twentieth century, although we still have a long way to go.

Or, take for example the remarkable change in the last century regarding the widespread belief that sickness, poverty, and many other discords are inescapable. The idea of progress, that men and women should be able to overcome evil, has emerged as a powerful influence in people's lives. 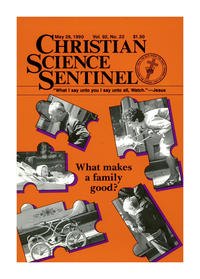