Confessions can have a powerful effect. Last year the Editor revealed that he didn't subscribe to the Sentinel. (See the inside front cover, May 29, 1989.) Well, it wasn't quite as bad as that sounds. You see, the subscription coming to their home was in his wife's name. The column went on: "But slowly the light dawned that in order to support fully the Sentinel and The Christian Science Journal and other publications of The Christian Science Publishing Society, he needed to be subscribing in his own name as well as contributing and praying. Now he is (you probably saw this next line coming)... and he hopes you are too!"

We got some interesting responses.

Send a comment to the editors
NEXT IN THIS ISSUE
Editorial
In the search for healing... 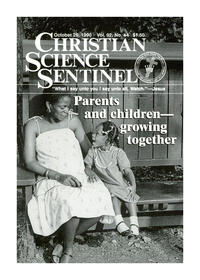