The trust that provides safety

God's ever-present care is provable— because it's spiritually natural.

The warrior Goliath threatened to kill the young shepherd boy David and to reduce to servitude the army of Israel. But the threat proved powerless. See I Sam. 17:4–50 . Why? Because of David's spiritual conviction, his trust in God's omnipotence. It was God's power, after all—not the sword or spear—that saved him and the Israelites.

David's example is considered a marvel. But it is more than that; it is a proof of the inherent impotence of evil and of our God-given ability to demonstrate this spiritual fact. The life of the great Exemplar, Christ Jesus, includes more and higher proofs. For instance, the Bible records several occasions prior to the crucifixion when the Master faced attempts to kill him. In each case the threatened evil was denied its target. How did Jesus accomplish these proofs of protection? He relied on the same omnipotent power of God that David had trusted in. He knew that God was both cause and creator; any other claim to power, intelligence, or life had to be empty, illusory. Jesus' ultimate proof of the nothingness of evil came with his resurrection following the crucifixion. Speaking of this event, Mrs. Eddy writes in Science and Health: "Jesus could have withdrawn himself from his enemies. He had power to lay down a human sense of life for his spiritual identity in the likeness of the divine; but he allowed men to attempt the destruction of the mortal body in order that he might furnish the proof of immortal life. Nothing could kill this Life of man." Science and Health, p. 51.

Send a comment to the editors
NEXT IN THIS ISSUE
Editorial
To pray ... and mean it! 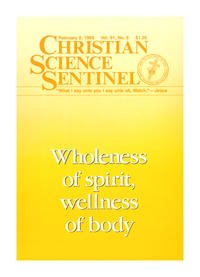