Jesus' words and works show us the way

Preaching and practice were one for the Master. Can Christ Jesus' followers succeed if they see the two as independent of each other?

One afternoon, in a downtown bookstore where browsers are welcome, I picked up a brightly colored children's book that recounted several of Christ Jesus' healings. It was interestingly written and illustrated. As I replaced the book and began my walk home, I pondered what I had read. Something was missing! It occurred to me that since only the accounts of healing were given, Jesus appeared as a miracle worker—as someone who did supernatural deeds. Moreover, the book implied that the healings resulted from Jesus' personal power. It was then I realized that from my study of the Bible and the Christian Science textbook—Science and Health by Mrs. Eddy—I had learned to see the correlation between Jesus' words and deeds. I had learned that Jesus' words and works are not independent of each other. Rather, his works confirm his teaching. His healings were the natural outgrowth of understanding God's omnipotent goodness, and his followers can understand this power and heal in the way he did.

Many people generally accept the Sermon on the Mount as a guide for behavior but still believe that healings aren't for today. However, when Jesus' teachings are spiritually understood and lived, healing results. His teachings are not abstract and impractical. As Jesus said of his words, "They are spirit, and they are life." John 6:63. 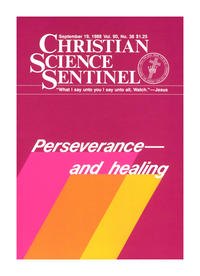