When a teen-ager talks suicide

When life seems nothing but bleak, our responses can become literally healing and saving ones as we listen for God's answers.

I Was worried about our teen-age son. His behavior was anything but normal. More often than not he was filled with anxiety and prone to fits of crying or angry outbursts. Teachers were having difficulty with him, and at home he was a source of friction.

Trying to help him, I talked with him many times but found it impossible to reason with him. When I asked him what was wrong, his answer was always "I don't know." When I suggested that he pray, he spouted viciously, "I don't believe in God!" Several times, either in anger or despair, he mentioned suicide. 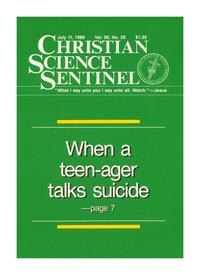