When I was in my teens my parents sent me to an academy in...

When I was in my teens my parents sent me to an academy in another state. This school was noted for its academic excellence and strict military discipline. The latter was accomplished through an organization of cadet officers and cadet noncoms. As there was much turmoil in my thoughts at that time, I had trying relationship problems with the other young men. Having been a pupil for many years in a Christian Science Sunday School, I turned to God to sustain me during those difficulties. My study of the Bible and of Science and Health by Mrs. Eddy drew me closer to God. This culminated in a resolution of the problems and some spiritual growth in Science.

However, during my second year at the academy I became caught up in intense rivalry for promotion and recognition. Prayer and the study of Christian Science were forgotten in favor of getting stripes on my sleeve and medals on my chest. The competition was intense, and I became increasingly fatigued, until I was literally dragging myself around by force of will. Finally, I became too ill to continue and answered "sick call" at the infirmary. There I was examined and immediately put in bed. I was so ill I lost consciousness for several days.

Send a comment to the editors
NEXT IN THIS ISSUE
Testimony of Healing
I'd like to testify to my quick healing of the desire for drugs... 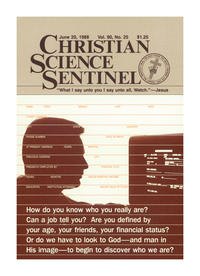