"This ... is the point behind the point about literacy. What matters, in our age, is not just that people read for information, or for amusement, or for whatever else the television screen and computer terminal can alternatively provide. It is that they read for wisdom, for depth, for a conscious acquaintance with the values and judgments of great thinkers thinking greatly. The tragedy of illiteracy— and the even greater waste of aliteracy, involving those who know how to read seriously but don't—is that it abandons the accumulated wisdom of the ages. It places fine writing in the hands of fewer and fewer interpreters, whose translations and commentaries become progressively oversimplified—and whose audience, increasingly unable to think for itself, grows more and more susceptible to the manipulations of the elite.

"Are we headed, then, backward into the pre-print attitudes of the Middle Ages, when the literate few ruled the illiterate many? Our sense of democracy should rise in rebellion at such a notion. To avert such backsliding, the last years of this century must be given over to two things: training people how to read, and teaching them why they should want to read...."

Send a comment to the editors
NEXT IN THIS ISSUE
Poem
Trusting God, go forward! 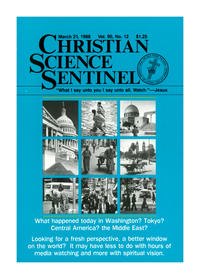