A tiny warbler was building her nest. In the brambles nearby a cowbird waited and watched. Now, the cowbird is a nest parasite that depends upon other birds to hatch and nurture its young. So when the warbler had finished her nest building and left the nest unattended, the cowbird hastened to deposit her own larger egg among the other bird's smaller ones.

The unsuspecting warbler returned, and not recognizing the larger egg as an imposter, brooded it with her own. Being larger, the intruder egg received more warmth, and so the cowbird hatched first and was the first to be fed. As the chick grew, it became more demanding, and the warbler, still deceived, catered to its voracious demands. Her rightful heirs were neglected and finally perished from lack of nourishment or else were pushed out of the nest by the cowbird chick. 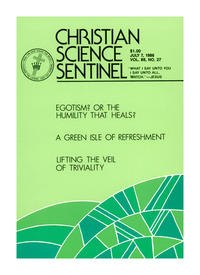