Contributing to the solution of crime

If one has a deep Christian desire to help free mankind from victimization by crime, isn't dealing with the fear of becoming a victim a good place to start?

Mrs. Eddy writes in Science and Health: "Christian scientific practice begins with Christ's keynote of harmony, 'Be not afraid!' Said Job: 'The thing which I greatly feared is come upon me.'" Science and Health, pp. 410–411. Clearly there is a necessity for a criminal to repent and be redeemed. But what is our responsibility? Beliefs in the reality of evil, as well as fear of becoming a victim of evil, are the opposites of Christian mental practice. These beliefs tend to enlarge on evil rather than destroy it. In a sense, they contribute to crime rather than solve it. But once one realizes that crime is at bottom a false belief that would enthrall both criminal and victim, he can, through prayer, begin to destroy it.

Send a comment to the editors
NEXT IN THIS ISSUE
Article
Why limit our progress? 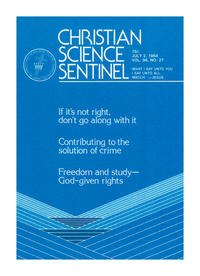