The last testimony I contributed to the Christian Science periodicals...

The last testimony I contributed to the Christian Science periodicals appeared in the September 1944 issue of The Christian Science Journal. Since that time there has been much opportunity for growth, and it has been a joy and privilege to serve the Cause of Christian Science in some small way. There have been many healings while bringing up a family of three daughters. However, most discords were destroyed before becoming major problems, either through our own prayers or with help from a Christian Science practitioner.

At one point it became distressful for me to be on my feet or to do any walking. In fact, the pain in my feet and legs became almost unbearable at times. This was during a period when a member of the family was hospitalized, and afterward was under medical care at home. I am grateful for the grace that enabled me to support this loved one in his choice of care. However, I felt under pressure, and it became necessary to ask for the help of a Christian Science practitioner from time to time. When I did I received relief from the pain, but complete healing did not come. Still I knew my thought was being lovingly directed Spiritward and that each call for help was a step toward that healing.

Send a comment to the editors
NEXT IN THIS ISSUE
Testimony of Healing
One time while visiting friends in another city, I woke in the... 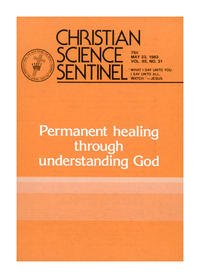