Only good is contagious

Advertisements warning against contagious disease and offering various patent medicines are often displayed on television and in the newspapers. News bulletins sometimes warn of an epidemic approaching from another country or state, with details of its direction and date of expected arrival, and the populace is told to take necessary precautions. Although the motive behind these warnings is a sincere desire to protect the public, the unfortunate result is all too often an increase in fear and expectancy of the disease.

Christian Science explains that this increase in fear tends to induce the very disease the warnings are intended to prevent. It is fear itself, accepted into thought, that occasions disease, for whatever governs one's thought outlines itself on the body. This scientific explanation of the fundamentally mental nature of disease indicates the way to protection and cure. It points to the possibility of dispelling fear and thereby removing its effects on the body. 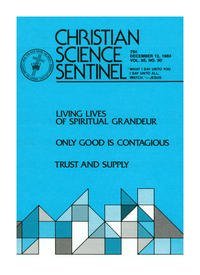