I have been a pilot for thirty years

I have been a pilot for thirty years. One day about six years ago I took several friends on a scenic flight through the Grand Canyon. After takeoff the airplane went completely out of control. We seemed to face the certainty of a nose-down crash. Because I was able to shut out fear and listen only for God's guidance, I was directed exactly how to get the airplane under control and back on the ground. However, when the plane made contact with the ground, a fuel tank ruptured and a fire began. Yet as soon as the airplane had come to a full stop, we all were able to walk out totally unharmed. As in the case of the three Hebrew men who had been thrown into the fiery furnace, not even "the smell of fire" was on us (see Dan. 3:27). All six of us were most grateful to God for our protection.

Later a problem occurred when the Federal Aviation Administration conducted an intensive investigation to determine the cause of the accident. They concluded that I had overloaded the airplane. At that point there appeared little to be grateful for, because my pilot's license was rescinded. Reinstatement would involve many hours of examinations, including check rides with qualified pilots.

Send a comment to the editors
NEXT IN THIS ISSUE
Testimony of Healing
In August 1981 my husband removed some four-by-four posts... 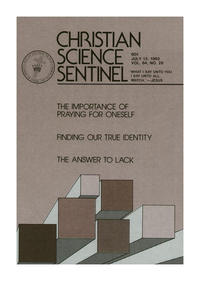