Nothing can be taken from us

When Steve was in his early teens, one of his classmates ("a big bully," as Steve called him) took away his pen. That night Steve told his dad what had happened and that he needed a new pen. His dad wanted to know what Steve was going to do about the one that had been taken. Steve replied: "Absolutely nothing! This guy is twice my size, and you just don't mess with him."

After they had talked about it for a while, they agreed that even though a pen was no big deal, here was a challenge to rectify something wrong by applying what Steve had learned about prayer in the Christian Science Sunday School. Steve and his dad talked about substance. What could help them see Steve's real substance? And the substance of his classmates? What went through Steve's mind when he thought of his good friend Bob down the street? Steve thought about Bob's friendliness, his generosity, his sense of humor and joy, and his helpfulness. Those qualities, Dad explained, showed something of Bob's real substance; and those and other good qualities such as honesty, love, patience, forgiveness, and justice indicated Steve's real substance, too. The Godlikeness they pointed to was the substance of his real spiritual selfhood.

Send a comment to the editors
NEXT IN THIS ISSUE
Testimony of Healing
As a young man, I felt somehow there was more... 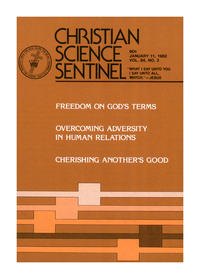