Wealth: what is it?

"Jesus of Nazareth was the most scientific man that ever trod the globe," Science and Health, p. 313. writes Mrs. Eddy. She could also have described him as the wealthiest man ever known. Jesus was rich beyond measure, but not in the worldly sense. He understood completely that God is the supplier of all good to man.

Although we have no record that he owned property, a house, flocks, or had substantial financial resources, he could never have been regarded as poor, deprived, or lacking anything. And on more than one occasion he supplied food for thousands at a moment's notice. What does this tell us?

Send a comment to the editors
NEXT IN THIS ISSUE
Article
Captives? No! 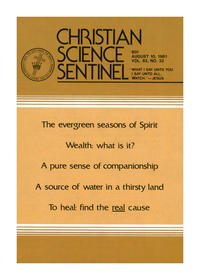