A lion in the house?

"What's with lions?" asked Terry as she sat down at her Sunday School table. She had heard Mary talking about the lion on her dressing table. "It reminds me of moral courage," Mary explained, "because in Science and Health Mrs. Eddy compares moral courage with a lion."

After the bell rang and Sunday School started, the discussion went straight to what had gone on the Sunday before. The class had talked about this sentence of Mrs. Eddy's on page 514 of Science and Health. It reads, "Moral courage is 'the lion of the tribe of Juda,' the king of the mental realm." The students then shared ideas about the meaning and reward of showing moral courage. Some of them were seeing why this quality is "king of the mental realm." Practicing it in their everyday lives made them rulers, rather than slaves of circumstance. Jan said she had been expressing moral courage by standing firmly for love, even when a group was making fun of or ignoring a classmate. She said she knew that God is Love and that she, as the likeness of God, Love, could not be swayed by peer pressure into hating or putting up with hate for another. She felt that since her real identity was always loving, she could be a leader rather than take part in mortal meanness. Often this resulted in others following her example.

Send a comment to the editors
NEXT IN THIS ISSUE
Testimony of Healing
Shortly after my marriage I became ill with a... 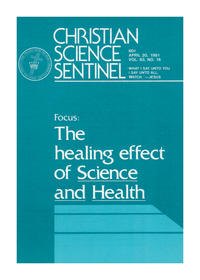