In the Book of Revelation, John writes of the angel Michael...

In the Book of Revelation, John writes of the angel Michael (12:7, 8): "There was war in heaven: Michael and his angels fought against the dragon; and the dragon fought and his angels, and prevailed not; neither was their place found any more in heaven." In Science and Health Mrs. Eddy says (pp. 566-567): "Michael's characteristic is spiritual strength. He leads the hosts of heaven against the power of sin, Satan, and fights the holy wars." A few days before the birth of our third child we picked the name "Michael" for him. This name became very meaningful for us in the days and weeks that followed.

The delivery of this baby was very difficult for both mother and child. A few moments after the birth, one nurse said he was a "blue baby." We were told later by a doctor that our child was very ill but that the problem was not what the nurse had said. Instead, it was a "wet lung." The birth was premature, and according to the doctor this made the condition more acute. He went on to tell us that the next fourteen hours were important if our son was to survive. We asked the doctor that no medication be given. He said there was nothing medically he could do anyway except wait; he didn't hold out much hope that our son would live.

Send a comment to the editors
NEXT IN THIS ISSUE
Testimony of Healing
Recently, while visiting with my sister in the United States, I suffered... 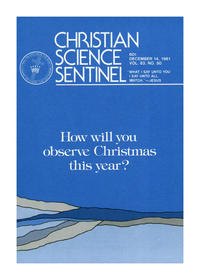