Two people were watching a television documentary about a far-off land. The picture showed a group of primitive people singing hymns in a whitewashed country church. One of the viewers said—rather thoughtlessly—"Those people look so simple. How will they ever catch up to the modern world!"

The other replied, "Look again, my friend. Don't you see something in their faces to admire? Don't they have something to share with us?"

Send a comment to the editors
NEXT IN THIS ISSUE
Article
You're perfect! 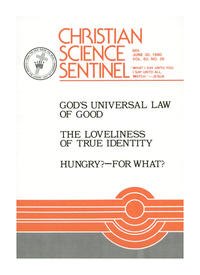