Spend a few minutes and forecast your potential for fortune (or misfortune) during each day next week, next month, next year.

Adherents of the theory of biorhythm are claiming this is now possible through charting the so-called intellectual, emotional, and physical cycles of human life. Though labeled a pseudo-science by some experts, the theory is still popular. Time magazine described its vogue: "Biorhythm is now a multi-million-dollar-a-year business, serving more than a million believers in the U.S. The word is spread in books, newsletters, a syndicated column and shopping-mall computers that churn out daily charts for 50¢." "Those Biorhythms and Blues," Time, February 27, 1978, p. 50; 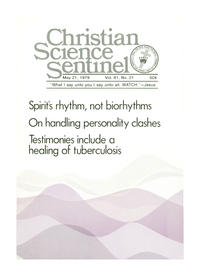