I was first introduced to Christian Science when a co-worker offered me a copy of Science and Health with Key to the Scriptures by Mary Baker Eddy, who discovered and founded Christian Science. I took the book but stated emphatically that the only reason I would read a book on religion was to show my friend exactly how contradictory it was. Some time ago I had come to the conclusion that there was no God, because I had found no way to reconcile the God I learned of in my childhood with the evil in the world. Seeing no need or basis for morality, I had allowed my way of life to become hedonistic. Although I tried to read the book, I soon laid it aside as ridiculous.

In the next few months the emptiness of my way of life became increasingly and unmistakably apparent. My job did not work out; a trusted friend proved false; a nervous stomach condition became acute; a beloved relative passed away—and finally one night the ceiling of my bedroom collapsed! In utter desperation, I picked up the discarded copy of Science and Health and read the entire chapter entitled "Creation." Like the prodigal son, I came to myself. I glimpsed the idea of God's unchanging perfection. He had never stopped being perfect, and He had not created an immoral child. My own misguided concept of God and His creation was the basic difficulty. As soon as I realized this, I was at peace for the first time in months.

Send a comment to the editors
NEXT IN THIS ISSUE
Article
An interview: with an advertising executive 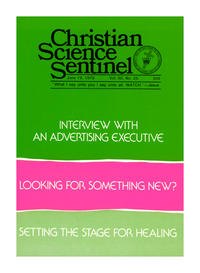