The sailboats were well along the first leg of the big race when a boy arrived late with his craft. It was unlikely that he could catch up to the fleet, but he decided to launch his boat and enjoy the sail anyway. He inquired of the race officials about the proper course for his class of boat and then set off. His boat, bobbing hopelessly along after the fleet, brought some smiles to those on shore.

As the boy neared the first marker of the triangular course, he suddenly noticed that the other boats in his class had sailed past the marker and out toward a distant buoy. In the heat of competition they had taken the wrong course, the longer course marked for the larger-class boats! Smartly he rounded the nearby marker, trimmed his sails, and tacked for the second marker and then for home. While the other boats were far in the distance, he crossed the finish line and won the race!

Send a comment to the editors
NEXT IN THIS ISSUE
Editorial
Being: its oneness and wholeness 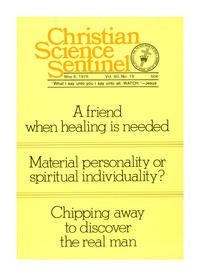