Where are the heroes?

Citing a recent poll of twelve hundred junior high school students, a magazine article points out that the most popular response to the question "Who is your hero?" was "None." Lamenting the fact that few if any people today could be characterized as heroes, the author writes of acknowledged past heroes, "... it is fair to say that there was a certain nobility, a largeness of soul, a hitching up of one's own purposes to larger purposes, to purposes beyond the self, to something that demanded endurance or sacrifice or courage or resolution or compassion ...." Newsweek, August 15, 1977;

Where are the heroes of today? Do they exist? There is no lack of heroes and heroines. But there is a widespread lack of awareness and appreciation of them. Before wondering where to find today's hero, we might first appreciate the fact that those who were true heroes of the past are, in a sense, still with us. Spiritual qualities are the makings of a genuine hero, and those qualities are ongoing. They continue to bless even though the person we associated those qualities with is no longer here. 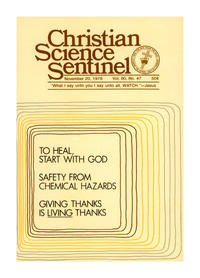