As a very young girl I had been living in intense fear for a...

As a very young girl I had been living in intense fear for a long time. At one point I became ill and was hospitalized because of a ruptured appendix. Upon release from the hospital I was in a worse state than ever. I couldn't sleep and was afraid to eat because nothing seemed to agree with me. I began making the weary round from doctor to doctor, without result. My fear was intensified at this point because I had lost my mother to a terminal illness when I was a child, and I remembered how many physicians she had been to and how many times she had been hospitalized. It now seemed to me that history was repeating itself.

One day, during my darkest hour, while walking despondently along a lake near my home, I met a childhood friend whom I had not seen for many years. She was concerned about my appearance and condition. I told her all that had happened to me—that the doctors couldn't help me. She said, "If they can't do anything for you, why don't you try Christian Science?" "What is that?" I asked, and she answered, "I really don't know, except that a relative of mine had a severe stomach condition for which there seemed no cure. She finally tried Christian Science, and she's fine now."

Send a comment to the editors
NEXT IN THIS ISSUE
Testimony of Healing
My daughter gave me Science and Health by Mrs. Eddy, and it... 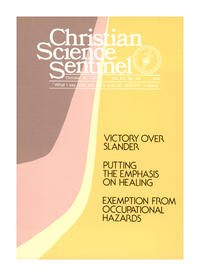