Liz was pretty upset. Someone in her classroom was stealing things. At first it was her lunch money. Now two passes for next week's big football game were missing from her desk. This was too much! After school she decided to phone Grandma and tell her about it. Grandma and Liz and her family were Christian Scientists. Liz felt there had to be a way to stop this stealing. If anything could do it, she felt prayer could, and Grandma, being a Christian Science practitioner, certainly knew about prayer.

"Of course this can be stopped." Grandma's voice on the phone was firm and reassuring. "Do you think you know who's doing the stealing?" she asked. 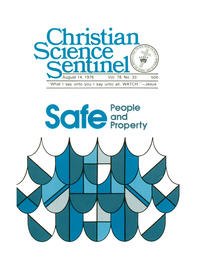