Nearly two thousand years ago the Apostle Paul wrote, "We wrestle not against flesh and blood, but against principalities, against powers, against the rulers of the darkness of this world, against spiritual wickedness in high places." Eph. 6:12; It does seem to many an individual suffering from sickness, however, that he is wrestling "against flesh and blood." It is certain that most of these same individuals would readily admit that "rulers of the darkness of this world" might be considered a perfect description of their worst enemy: fear.

Modern medicine bases its healing theories on the belief that matter is real—that flesh and blood frequently need to be wrestled with, medicated, operated on. But even the proponents of material means of healing are becoming increasingly aware of how mental factors affect illness and especially the enormous part played by fear.

Send a comment to the editors
NEXT IN THIS ISSUE
Article
"For storm or shine, pure peace is thine..." 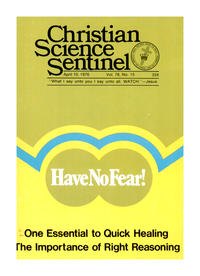